Midlife and Tattoos (2): The New Ink

Caution - Adult words are used here with great abandon - as in LOTS of them.

Getting a tattoo is not all that dissimilar to childbirth.

1. It hurts like all bloody hell fire.
2. You lay there exposed, sometimes nekkid (although I wasn't, nekkid that is).
3. There are periods when it hurts less and then there are surges of pain where an expletive or two might accidentally run away with your tongue.
4. It hurts like a motherfucker...for days after, it still hurts. (Click HERE to see my my first tattoo experience and an abundant use of the word "motherfucker").
5. The process yields a product that you are stuck with for life (tattoo/baby...same diff).
6. Damn it stings! OUCH...motherfucker...(Lamaze breathing ensues).


Of course, when the artist was working on my latest masterpiece I had my big girl panties on and suppressed the overwhelming desire to lapse into Lamaze breathing. Whining and whimpering are frowned upon in tattoo parlors. 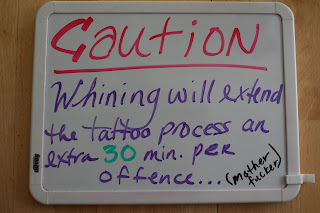 O.k. not really, I made this sign. I know, I know...I had you fooled, because this looks so official - what can I say, talent abounds inside me. Oh, and...I don't have to worry about giving photo credit or links, violating any copyright laws and yada-yada-yada.  #winning

So, I checked my Whiny at the door while Mr. Artist got his stabby on and commenced with 2 1/2 hours of torture. Did you see that - TWO. AND. A. HALF. HOURS. 150 minutes. Yeah, yeah...I don't care how long some other tattoos can take, this here post is all about ME and 2 1/2 hours is a shit-ton of ouch right there. HUGE.

I took one break, just long enough to run outside and grab my water bottle. I almost didn't go back, but nothing says "you big fat wuss" like a half finished tattoo.

I'll get to the reveal in a minute, I'm working on it...don't be scrolling down to look at the picture yet.

Anyway, during the process, all I could think about (in between wanting to kick Mr. Artist in the shin) was how the kid who was getting a giant tattoo on the table next to me was going to wash the area, between his shoulder blades, three times a day?? I think it was his first tattoo, because he had 6 family members watching from the waiting area. They kept coming in, one by one, to look. Me? I was all by myself...(big girl panties, I was wearing them...)

Tattoo care, at least the instructions given by the last two artists, is to wash the area three times a day with a mild antibacterial soap, then every evening (once a day) put on a tiny amount of lotion - like just a drop. And...I can tell you this...once the tattoo starts to dry, scab and pull, one must fight the desire to dump a bucket of lotion on the area and rub-rub-rub...sigh...that would feel so good, but it is SOOO bad for the tattoo (dammit).

Now for the reveal, I want to remind you that fresh tattoos are like caterpillars in a cocoon. They go through a metamorphosis, where they dry out, scab, flake, peel, pull & pucker the skin and for a short period of time, look kind of gnarly. Once the process is done, though...a beautiful work of art emerges. 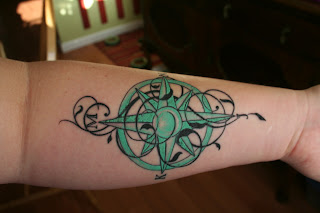 Yes, my arm is still a bit swollen...and red (but better than yesterday)...and there are the scabby bits and such. I'm a no holds barred blogger, I show you the gritty underside to this sort of stuff. You get to see the tattoo in its cocoon phase, lucky!

And yes...it still hurts like a motherfucker sometimes, like yesterday when I forgot for a second and flopped my purse strap down on my arm (I mentally kicked Mr. Artist in the shin again...whatever, I know it isn't his fault, but I feel better when I blame someone else).

However, remember what I said about tattoos and childbirth being similar? Well, nature has this wicked way of helping mothers diminish the memory of childbirth pain in an effort to populate the planet - meaning, we sort of forget how much it really hurts when we start wanting another child. (before I get any hateful comments, this is a generalization - we don't REALLY forget that it hurts, but the desire for another child often outweighs the effort/pain required to spit one out...ya know?)

I have a feeling that the long healing process my skin goes through to recover from the recent trauma will be forgotten when I start thinking about how awesome that Dio de los Muertos skull will look.

Later, though...much, much later.  For now, I'm going to stare longingly at the lotion bottle and maybe go stick my arm in the freezer.

Peace!
Posted by alienbody at 9:52 AM