No Longer a Tattoo Virgin

Motherfucker is NOT a word I throw around lightly.

Is Motherfucker one word or two?

Doesn't matter...in this case it is one, since when shouted it 'sounds' like one.

Motherfucker is a word that I reserve for extreme circumstances - like dropping my KitchenAid mixer on my fingers, slicing off a body part, giving birth (without drugs), jerks cutting me off in traffic...etcetera.

As in, "MotherFUCKER that hurt!"

But, my new (also FIRST - and very possibly ONLY) tattoo is beautiful. 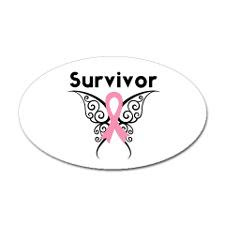 My inspiration, taken from the Interwebz. I didn't draw it, don't know who did. 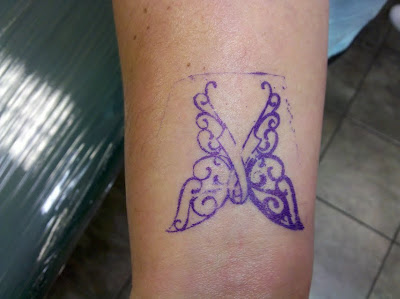 The template...getting a wee bit nervous. 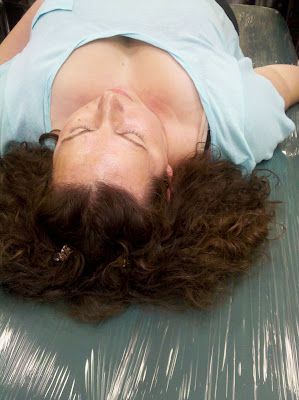 No, I didn't pass out, no I'm not dead and no, I didn't pose. And..I should have brushed my hair and worn make-up. Hubbypants or Darling Daughter will suffer dearly for taking this picture - in which I was doing some relaxation breathing because it HURT LIKE A MOTHERFUCKER. 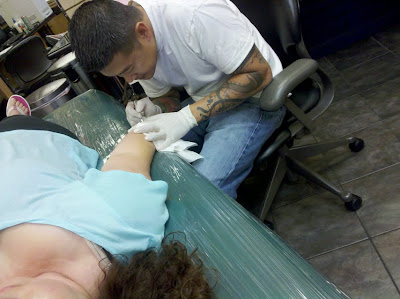 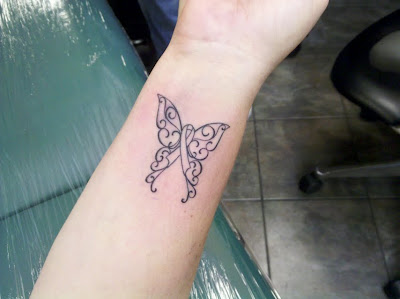 O.k. so we are at a crucial moment here - I can either go with it as is (and that wouldn't have been so terrible since it is so lovely) or....OR....I could add the color to the ribbon now, instead of coming back later - which, because it MOTHERFUCKING hurt, returning was becoming less and less of a likelihood.

So, I opted for adding lavender to the ribbon. And it hurt, like...well, if you don't know then clearly you have not been paying attention.

The lavender will fade from the purpleish color it is now, into something softer (I hope). Lavender is the color that represents ALL cancers. I chose lavender because I want to be reminded daily to be thankful for being so lucky and for all I have...and everyone that I have...in my life - not just for being lucky enough to escape the clutches of thyroid cancer.

I want to be reminded daily of those that I've lost, those that are currently fighting and those that I will lose some day- because it comes with the territory that is aging. And sometimes, always, it sucks. It isn't morbid, it is all about appreciating the people in my life now, not wishing I had should I ever lose them.

And so...just know that I'm thinking of you and wishing you much health and happiness.

Peace.
Posted by alienbody at 7:38 PM