Cuteness in the Making

In the spirit of pursuing My Manifesto, I did stuff this weekend.

Although, it wasn't anything from my Bucket List. Mostly because I'm easily distracted...and *maybe* a little fickle.

BUT, you'll be happy to know that what I DID do has brought me extreme joy and, in a small way, has created a path through the funkishness that has plagued me lately.

I'm working up to purging my house of stuff I will un-likely ever use, but which I keep because some day pigs might fly and hell will freeze over and I don't want to be caught unprepared. However, since I've decided to spend a little more time in this place known as reality, I'm going to get rid of those items because a cluttered house is a cluttered mind and I want some fucking zen, ya know?

And so...while I was scrutinizing the front pantry (a.k.a. the place we put stuff because we have no idea where else to put it) I came across these... (remember to click to enlarge pictures) 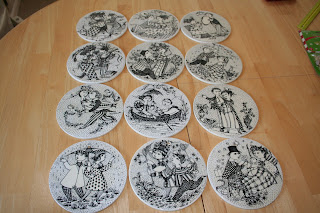 They are 6" ceramic tiles that were given to me as a gift many years ago and have been locked away in a dark corner of the closet for an obscene number of years. They are too beautiful to waste away in the dark.  It is a love story played out through the 12 months of the year, starting with January in the upper left - it moves through their courtship and wedding to end (in the lower right) with a baby. I just love them. So, I'm a terrible person for leaving them sit so long...mostly because I couldn't figure out what to do with them! 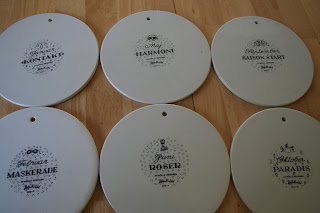 (the back of the tiles, with month of the year & such...in Danish) 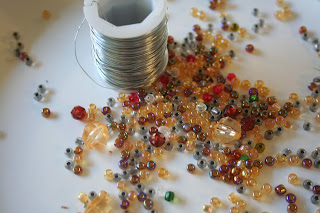 Then I had an epiphany - while contemplating how to get rid of the excess amount of beads I have.
Beads + wire = Stuff I could use to hang things...LIKE PORCELAIN TILES. 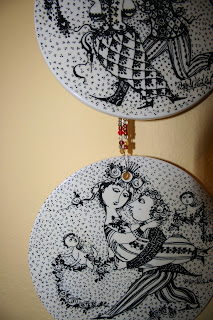 
VIOLA! Except, that when I uploaded the pictures I did it in the wrong order, so they are all out of sync and I just don't feel like futzing with it to fix it...so, scroll down.

THIS picture is Sept-Dec. 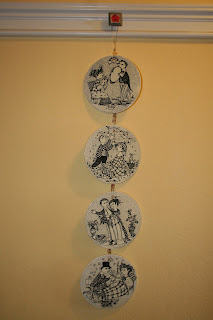 The picture below is May -Aug. 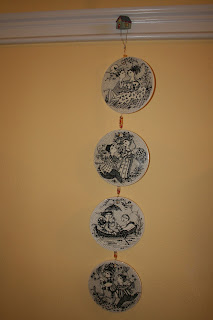 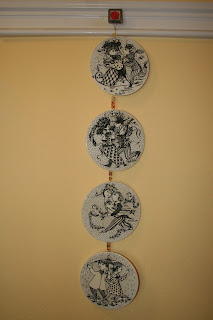 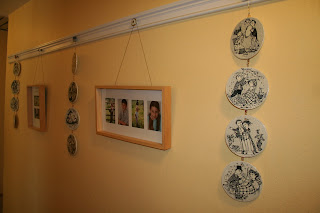 And...this is what it looks like hanging in the hallway. Key-oot!!!!

Don'tcha just love it!  Of course you do, it was rhetorical. 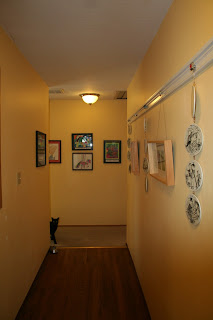 View from the front door, where you can see the rest of the kids artwork on the walls. And Pickles the Cat, who is hoping I'll break out the wire again so he can attack me and almost cause me to break half the tiles.

Unrelated - anyone want a cat? I have a box and packing tape...ready to go...just say the word.

Oh...and here is a close-up of the pictures hanging between the tiles...my kids before they turned into teenagers. They used to be so cute.  And now...I'mma gonna need a bigger box to send them to their next family.  Any takers? Ha...I kid...*mostly* 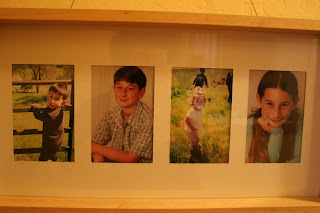 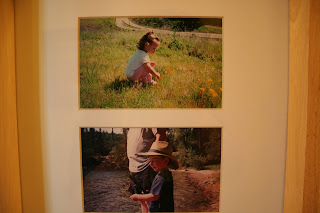 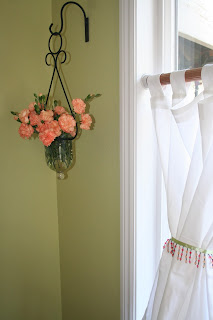 The vase has been hanging in that spot for a few years now, next to a nekkid window (meaning, window with no coverings).

I got tired of looking at the nekkidness...of vase & window, so I fixed it!

Carnations in the vase, clearance curtains with leftover beaded ribbon. 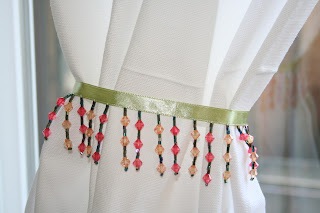 Ultimately, everything was done in an effort to avoid having to do any real work this weekend. Because...I had a weird premonition that working at chores & de-cluttering this weekend could lead to a disruption in the space/time continuum, which could be disastrous. Who wants to be responsible for fucking up the universe? Not me, I can tell you that!

That's it for now...I'll keep you posted on my efforts to de-muddle my brain and my house. Until then, enjoy my somewhat clear and mostly un-crooked pictures!

p.s.
There were a lot of hyphenated words used in this post.

p.p.s.
Just because I wanted to.

Posted by alienbody at 2:55 PM