When Life Gives You Teens...

What happens when your plans for the day go *poof* - all up an smoke?

Which is highly likely when you have a teen who isn't all that keen on getting out of bed.

Unfortunately, kid gets out of bed before the fun can start...phooey.

But kid is out of bed and that is progress. 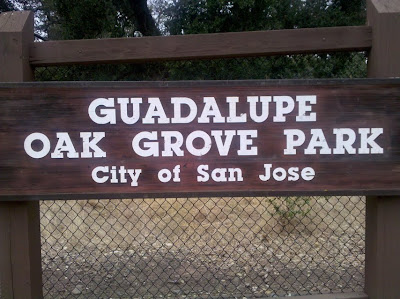 A HIKE! See, if the kid had any sense he could have had a French pastry and a stroll by the beach, now he gets hills and a water bottle. Silly boy. 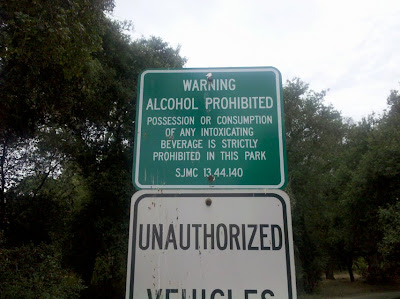 Better leave the flask in the car. 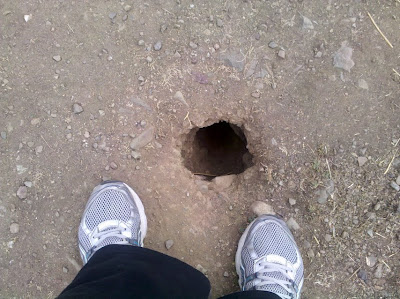 That is one big hole.

It was cool inside, too...like a labyrinth.

A labyrinth in a spooky oak grove...

I'd drink from my flask (that I don't really have, cause I was kidding, but it's a story so go with it) and I'd shrink.
But, not smaller than the critter that made that hole, I don't want to get eaten.
Then, I'd slide into the hole and explore the lair of the evil ground squirrel Dr. Bigtoof.
(It's my story and squirrels have big teeth - I suppose you have a better name?? Let's not even ponder the whole Doctor/Squirrel thing).
Anyway...then I...

Did I go off topic AGAIN?

Silly me, I shall get on with the blogging stuff.... 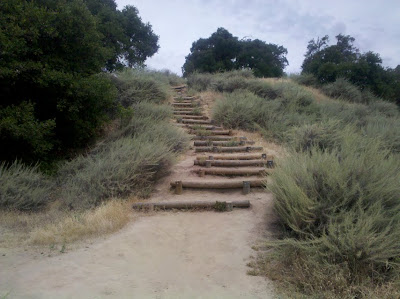 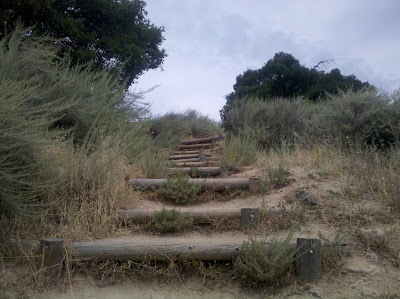 Until you get half way up and discover there are more of the little bastards.

I hate them...but I force myself to climb them.

I've climbed them many, many times.

But that is just crazy talk.

I climbed the other set too, that I didn't take a picture of. 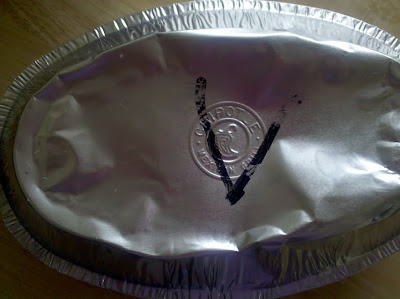 After the stairs, Nick and I felt the need for sustenance.

It doesn't stand for Victory.
Or, even Very, Very good.
It is kind of close to Vitally important Vittles, though. (I think that was rather clever)
It DOES stand for Veggie, as in Vegetarian, as in DELICIOUS (which does not start with a V).

I skipped the meat, the cheese and the sour cream.

You may be thinking, "Well then...what's the point of eating at all?" 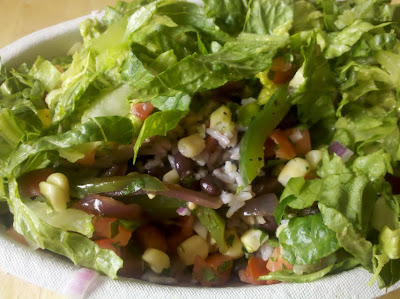 I am not a Saint, oh...no.
It wasn't easy passing up all that numminess.
But, considering the satellites that have started orbiting my ass, I figured cutting back a bit is wise.
And get this...the wonder of Chipotle...is that EVERYTHING, even the lettuce, is fantastic.
My nekkid burrito bowl was awesomely good.
I celebrated good decision making skills with ice cream.
Baby steps.

We ended our outing by stopping at Blockbuster for movies - because doing anything physical after all that eating could cause a cramp.

Cramps can be dangerous, you know.

We got The Green Hornet, The Season of the Witch and The Adjustment Bureau. We are on #2 at the moment - I'm not reviewing them, but let's just say that updating a blog while watching isn't a challenge. ;-)

Peace.
Posted by alienbody at 2:38 PM