The Human Canvas - Phase One: Art In Progress

And the twinges of pain, when the skin puckers and pulls - the tortured skin pulling against the unmarred.

The will to not scratch is hard to summon - instead, scratching is replaced by a brisk slap to the uppity area, as if punishing the skin for having the nerve to react to what has been done to it.

Such is the lot of The Human Canvas during the healing phase of a new tattoo.

I've got at least 3 more sittings, approximately 6+ more hours, of actual tattooing - along with a repeat of the healing process. Every. Stinking. Time.

Because...I want to.
Because...I live by so many rules, that I feel the need to break a few - specifically, the one that says I'm too old for this.
Because...I lack common sense.
Because...Today's artist are phenomenal with what they can create on skin.
Because...I want to literally imprint my figurative heart on my sleeve. Did I use literal and figurative right in this case?
Because...I'm mostly nuts.
Because...When everyone is 80 their skin will sag and be full of liver spots and bruises, so aged tattoos will just make it a bit more interesting. We'll all sit around the nursing home playing a game of  'Guess The Ink Blob'.
Because...I'm bad-ass. O.k., not really...but for the sake of this post, let's just pretend I am.

I've loved tattoos since I was a kid, well before every hipster in the universe started sporting them. I loved them back when only military guys and scary bikers got them.

Despite their increasing popularity and normalcy, people still have some pretty strong opinions about tattoos. While I'm not entirely sure Hubbypants likes having an inked wife, he's been silent about any displeasure while being outwardly supportive - I'm truly a lucky gal.

However, I do think, should Hubbypants decide to leave me, that I'll have a hard time finding anyone as accepting. Basically, by inking-up, I'm guaranteeing my future as a lonely, crazy cat lady - I've already got 3 cats...for practice.

I suppose you'd like to see what my new work of art looks like, right? Of course you do, duh... 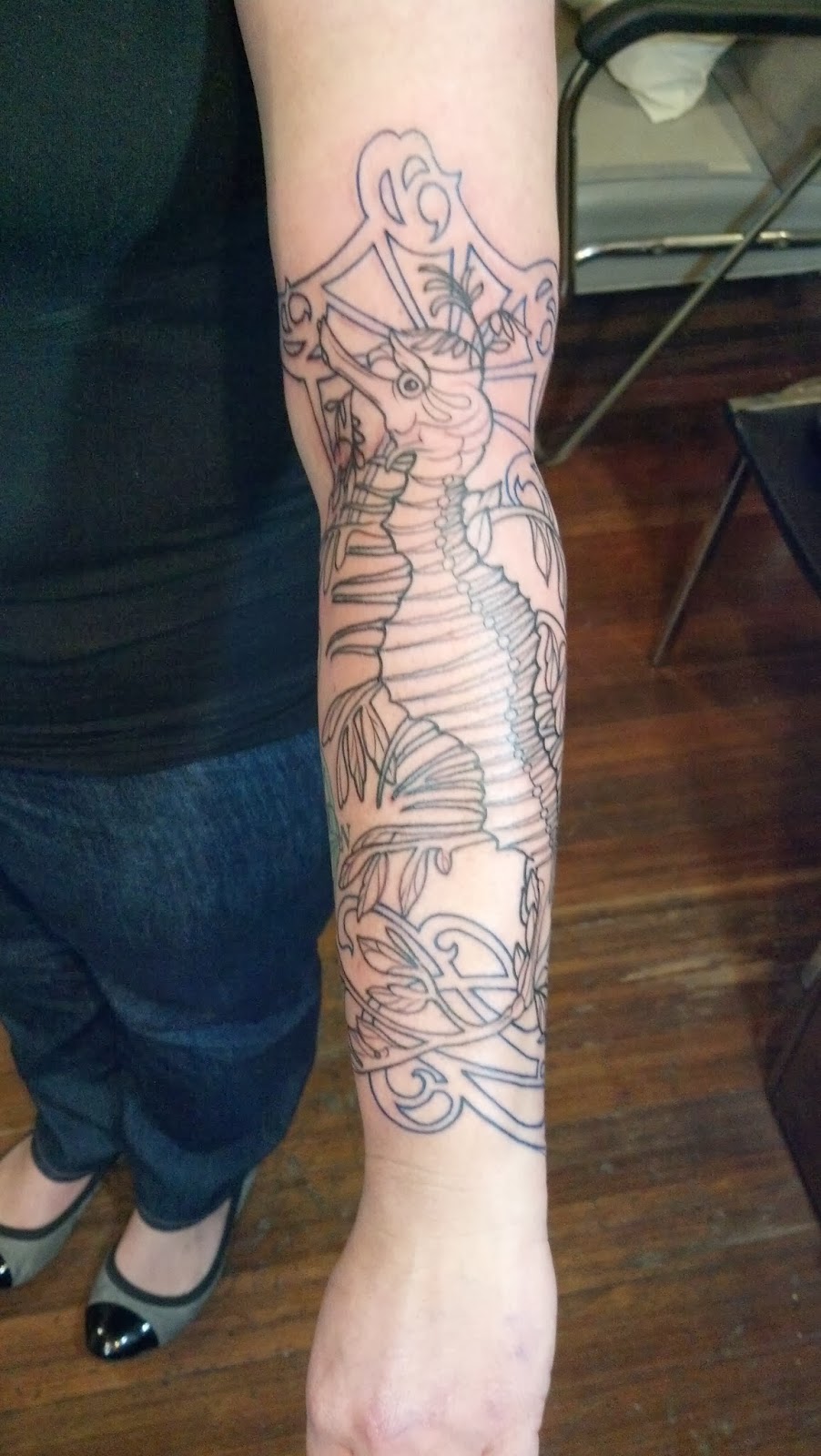 Sadly, the picture quality isn't all that great,
but fear not!!
My next appointment is in just a little over 3 weeks,
so I'll be back to whine some more share my progress!
I know you'll be waiting on the edge of your seat
to read more adventures of The Human Canvas!

p.s. I've totally glossed over how much getting a tattoo hurts.
p.p.s. Like, I'm not kidding, it fucking hurts.
p.p.p.s. Anyone who gets a tattoo is crazy.
p.p.p.p.s. Speaking of crazy, can cats be trained to be minions?
p.p.p.p.p.s. Because, really...if I'm going to have a lot of them, I might as well start working on an army to carry out my plan of world domination.
p.p.p.p.p.p.s. Wow, I guess I really am a bad-ass after all.