A Hike, The Ocean and Not Dying Today - NaBloPoMo Day 2

Yesterday I wrote about figurative risk.

Literal - as in, I almost died kind of risk.

O.k., not really. But, I could have died...if you consider that death can happen at any time, especially when it is super inconvenient and it would have been TOTALLY inconvenient today...especially for me.

I went hiking with Hubbypants today.

Historically, hiking has been a risky event when we do it together...because, we don't seem to speak the same language when it comes to things like distance and difficulty.

He'll say, "It isn't that hard and there's only, like, one medium(ish) difficulty hill." What he neglects to say is that he considers "medium" a mountain that takes us from sea level, through the troposphere and onward to tickling the bottommost level of the stratosphere. (Dude, I got an A+ in my college geography class, I know this shit).

O.k., not really - the part about Hubbypants (he isn't that extreme), but I totally DID get that A+ in geography.

Hubbypants is training to hike Mount Whitney this summer, which...knowing him, he likely considers a medium hike. When he isn't doing training hikes with his buddies, he likes to hike the local trails with me. I've been walking lots of hills, so they don't scare me as much as they used to, especially when I already know the terrain of our hike. When I don't? I get a little nervous and contact 911 in advance so they can start warming up the 911 chopper to airlift me out.

But today? Today I took a risk and agreed to a hike because 1) it involved the ocean and 2) I'm insane and I love Hubbypants and he makes me like doing stuff with him, despite my efforts not to. I think he's slipping something into my coffee.

Well, it totally worked in my favor and was a fabulous hike. We traipsed over 7 miles with NO HILLS. I know! Fucking awesome!!! Although, I do want to go on record saying that I was totally willing to walk some hills, because they've proven to be ass shrinkers and...well...mine still needs some shrinking.

I'm so glad I took the risk and put myself out there, willing to face whatever incline lay in my path...and potential certain death. Let's not forget how close y'all came to losing me today - those cliffs TOTALLY could have given way, sweeping me out to sea to become a hearty snack for Jaws.

I'll leave you with these images of our day - commence with the jealousy... 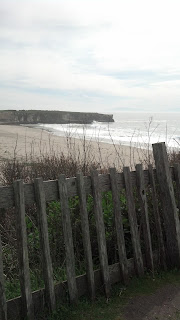 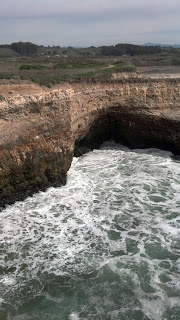 It looks as if the cliffs are thirsty and swallowing the sea! 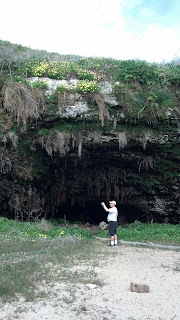 I sent Hubbypants in first, 'cause I'm not an idiot.
I know I can't outrun the Kracken, unless its busy eating someone other than me.
Sometimes, sacrifices have to be made.
I love you, Hubbypants and I would have totally missed you!
He survived, I guess the Kracken wasn't hungry. Whew....close call... 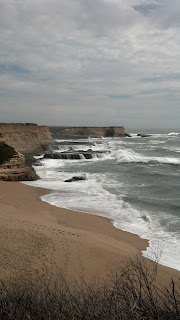 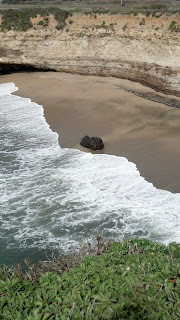 Poor wittle rock...all alone on the beach, no one to play with. 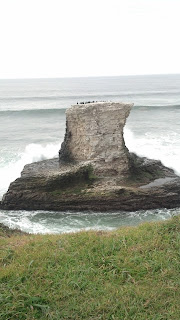 Anyone else see the squat little face wearing a top hat as it rises from the sea?
No?
No one sees that?
Not even just a little, like if you squint your eyes and look at it sideways?
What if you do all of the above AFTER a shot or 3 of tequila?
Still no?
Yeah...um...I don't see it either. 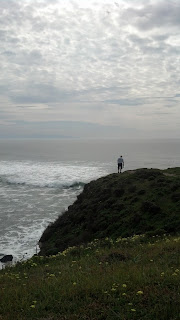 As soon as Hubbypants was done hogging the view,
I went out there to look.
Which, when you have a touch of vertigo, can be just downright stupid.
See, taking risks and living to tell the tale. 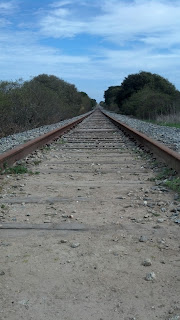 Risk
Where will it lead you?

Posted by alienbody at 8:13 PM