Taffeta, Velicorns and the fight against evil!

President Snow should watch his back, because if I figure out a way to tele-port myself into my book, he's going to see what it's like when I get my hurt on!

Katniss Everdean needs me. She needs a sister in arms.

I'm going to take my son's bow and arrows with me - instructional deficiencies be damned! If I can fling enough sharp pointy things in the general direction of the bad guy, I am BOUND to hit someone sooner or later. Those that are fighting against the big, bad Capitol meanies along side me might, as a precautionary measure, stay just a few paces behind me until I'm a bit steadier with my aim.

I'm a sucker for apocalyptic stories where people rise up to fight a sadistic regime that takes extreme joy in the pain and suffering of others - they are just such hopeful, uplifting stories, ya know?

And so it is that I've been sucked into The Hunger Games. 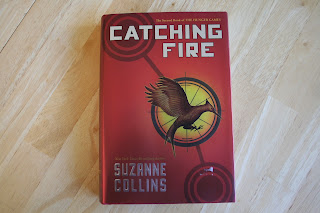 (Photo courtesy of My Camera. I'll be happy to share
the rights for the cost of a ginormous cup of coffee...and a danish.
Perhaps even a bottle, or 3, of wine.)


I didn't go kicking and screaming, more like shoving and pushing, because I am a sucker for YA lit. My favorite, so far, has remained How I Live Now by Meg Rossoff. But Hunger Games is a second 1st - sharing the spotlight in other words.

When I was a kid, I used to play Charlies Angels with my friends (that will be enough snickering out of you) and we'd hunt down the bad guys with poser style and flips of the hair! When I grew up a bit more, I started the application process to become a Police Officer. Citizens throughout the county breathed a sigh of relief when I changed my mind about wielding a gun in public.

However, that hasn't stopped me from imagining myself as some kickassknifethrowingarrowhurlingcoolmatirxflipping avenger for greater good.

But in cool outfit.

Who wouldn't want to take on evil hoards in an evening gown? A whirling dervish of taffeta and sparkly sequins designed to blind the enemy long enough to strike. Count. Me. In!!

I think I've digressed, again - it's always so hard to tell when one rambles as much as I do. Where was I going with this post?

Oh, probably to encourage you to read the series and enjoy it as much as I am now. The bad guy is just too evil not to love to despise and Katniss is a 16 year old that you both want hug and shake some sense into.

I've got to get back to reading and plotting the demise of President Snow. You watch yourself Snow, I'm polishing my tiara and I'm comin' for you, even if it is only in my imagination!

p.s.
One of my blog readers needs to write a story about a girl who kicks Evil's ass in a poofy dress. That would just be all kinds of awesome.

p.p.s.
Perhaps, all of the above BUT - she does it after she's been jilted at the prom and she's sucked into her favorite book, something like Hunger Games. Hell hath no fury like teenage girl scorned - watch out bad guys!

p.p.p.s.
Oh, oh...OHHHH - AND THERE NEEDS TO BE VELICORNS!!! Oh...ehM...Gee! Please, someone start writing this story before I wet myself in anticipation.

Posted by alienbody at 5:00 AM