One year ago this morning I woke up and had to try and remember NOT to drink any coffee.

Whoever invented the "no food or liquids after midnight" rule before surgery is a sadistic coffee hating misery spreading bastard. I'd like to give him - because I'm SURE it was a H.I.M. - SUCH a pinch!!!

I say this because I threw up after surgery anyway...despite not even THINKING about eating or drinking.

Yeah, yeah...I know - throwing up 'nothing' is better than anything...um...chunky, but surgery isn't like going in to have your eyebrows waxed (or worse). There is more nervousness, anxiety and pondering of ones mortality. Although, I would venture to guess that it is distinctly possible that your life would flash before your eyes during a Brazilian...but I'm only guessing, because as much crazy as I got goin' on up in here, it hasn't gone that far over the edge to even THINK about having that sort of procedure done - and I got a tattoo, which I would do again before any sort of southerly waxing. Oh. No. G'friend

Point being - coffee should be allowed, if only to comfort those facing sharp pointy objects and the anesthesia hangover. I'm going to write my Congressperson about this - it's not like they're doing anything else, so they might as well focus on something important.

Last year today was on a Wednesday.

The kids were at grandma's house since school was out for ridiculous budgetary reasons...which, ultimately, worked to my advantage since I was otherwise occupied.

My sister-in-law took the day off from work and drove an hour at the ass-crack of dawn to just be there with Hubbypants and I. She is the best SIL in the universe. You should get you one, you just can't have mine.

Hubbypants was a little stressed. I'm sure terrible thoughts were racing through his brain and he was worried that if something happened to me that he and the kids would starve. Little did he know that I've been preparing my children to soldier on without me, should I croak - meaning, they can at least use the microwave, cook Ramen noodles, make eggs and grilled cheese and a few other simple things. The girl child can even make cakes and brownies.

So, while they'd be lacking a good balanced diet, they would at least survive until he found a new wife.

It's 9:01 right now - this time a year ago I was snuggled under a giant heating thingamabob where warm air circulated through and made me all nice and cozy. I'd have given Kaiser a 5 star service rating had they also served me coffee - so close, Kaiser...so close.

At 10am, on the dot, they wheeled me in to surgery and promptly knocked me out. The gist of what happened; they insert this cool throat-tube-doohicky- thing that has sensors on it that go beepbeepbeepBEEPBEEPBEEP when they get to close to my esophagus. It seems that the esophagus and thyroid are involved in some passionate love affair as the thyroid wrapped itself around the wind pipe and well...get a room, would ya? So, to separate the lovers the surgeon needs to get really close to all sorts of nerves that would be REALLY bad to damage. Cool device.

The surgeon removes the offending lump, they freeze it, slice & dice and run it under a scope - if there be NO cancer, they sew you back up. If there be cancer, they take the other half of the thyroid. So, in my case the 1 1/2 hour surgery turns into 3 and they take the whole thing. My esophagus mourned the loss of its love for a very long time. Poor thing.

The rest of that day is a blurr, since I spent most of it in and out of sleep. I did manage to eat some of my liquid/soft diet and keep it down. The vanilla pudding was tasty though, so Kaiser earned a half star for that.

I had to stay overnight, because the Vampires in the area were running low on snack food, so they sent their minions in every few hours to take my blood. The 'nurses' said it was to check my calcium levels - but they can't fool me, I know they are in cahoots.

And so, the night passed with relative ease, the Vampires got fed and by early afternoon I was on the road home. 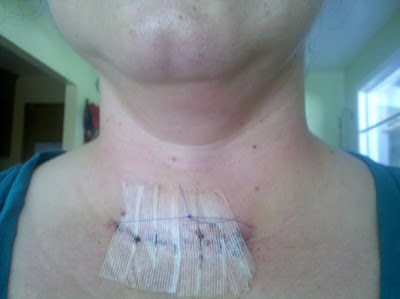 That is one long piece of plastic-type thread
woven through
to keep my innards from spilling out.
Pic was taken a few days after surgery.
Isn't that AWESOME!
It is, because NOBODY wants innards spilling out
into their coffee.
That'd just be wrong.

And when the doctor removed it, he just went
SNIP
and pulled the long thread clean out
in one motion.
Weird.
And ick.

And finally, since I've now left you with an image of my ickyness, I give you some sweetness.

Notes from my children, starting with my son. 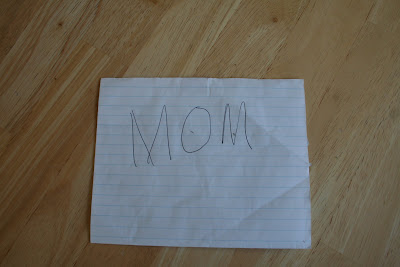 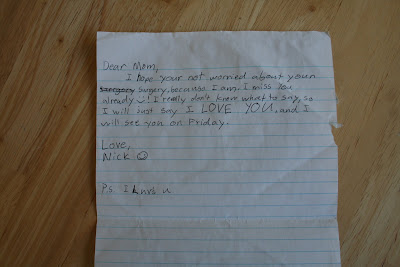 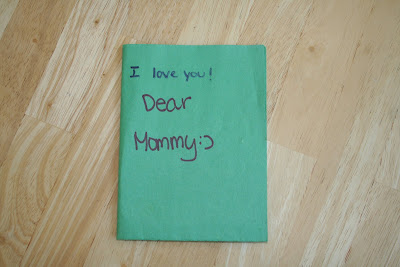 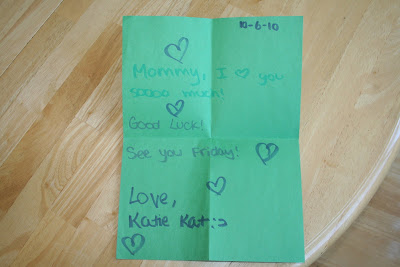 They left these cards for me before heading out to stay with their grandparents. They are full of sweetness and light - because I know they really wanted me to get through this surgery alive for fear of having to prepare their own meals or losing the mom taxi.

I love them oodles. And I know, that deep down...WAY, WAY down...they love me beyond my cooking, too.

Posted by alienbody at 9:51 AM