I am not that creative of a person.

It doesn't come to me naturally.

I can't look at something and imagine it another way - my home decor reflects my lack of vision.

I do not have artistic ability - I can't sew, draw, paint, mold clay, blow glass, and so on, and so on...(you, by now, get the full extent of my void of ability).

I should state that I have not even attempted to do the above OR sought out instruction. So...yea...

I can occasionally write something funny, meaningful, poignant or quirky...mostly quirky.

Lately I haven't even felt like gettin' my quirky on - it has a hitch in its giddy-up.

So, yesterday I tackled Wordless Wednesday again, and that was fun. But it came out (at least to me) so - mediocre. O.k., I DO realize it is a post involving stick figures and Sharpies, but still...it lacked flair, sparkle, pizazz.

So, I decided to channel my inner preschooler and I'm going to be a doodle diva.

I'm creating a poster, for myself (currently a work in process) focusing on a few words that are meaningful to me in some way.

I may not have the nerve to put it up in my house, it will clash with anything it comes into contact with, but I may pull it out when I need to see lots of color and randomness - when I need a creative boost in other words. 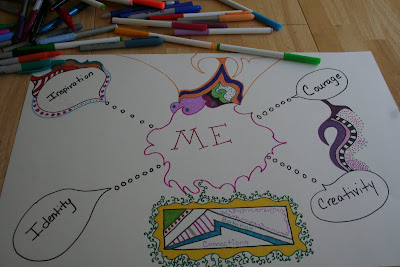 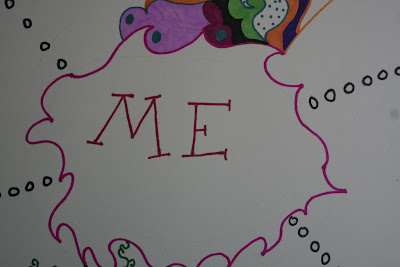 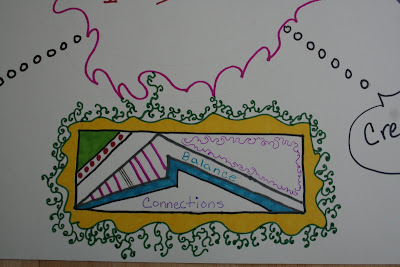 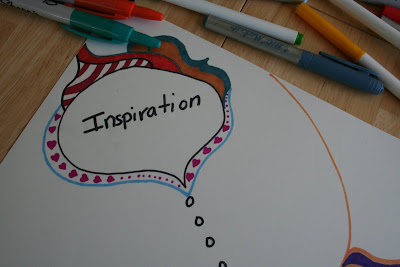 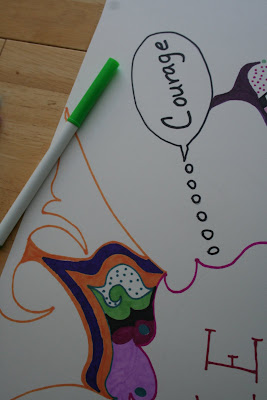 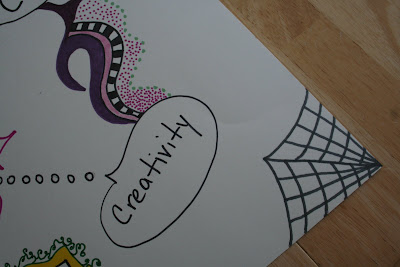 Lots of empty space to be filled in, so I'll work on it here and there.

Because, contrarty to what it might appear, I actually DO do stuff...like cleaning, grocery shopping, shuttling children...stuff.

I do not (most days) just sit on my ass and doodle or stalk people on Facebook.

O.k. well, I might do that EVERY day, but not ALL day.

Everyone doodles - it doesn't require skill or talent.

However, my sister recently sent me a picture that my father had drawn many years ago, which appears to be a series of doodles all strewn together.

I love it and it was one of the inspirations in me creating my own large scale doodle (along with being inspired by Aliesha - holla, shout out to the Divine Ms. A).

He could draw, really well AND he had OODLES of talent, so you'll see how it showed through in such a simple (yet not) drawing. 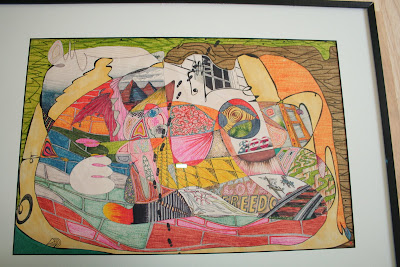 The whole drawing (above)
And now the bits and pieces 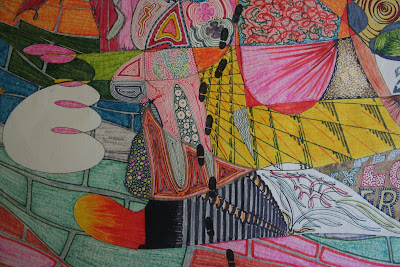 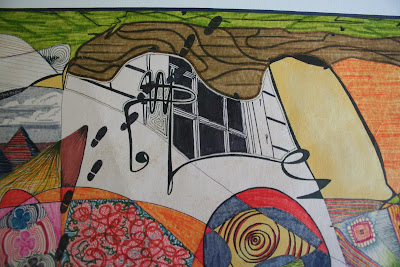 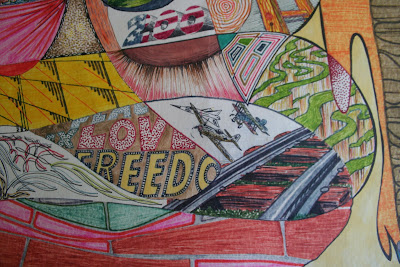 I think the planes are my most favorite part,
with the footprints running an extremely close second.

So, for now, I'm going to just take his inspiration and channel his spirit and do my own thang!

Regardless of whether this doodle project works to chase away my funk and unchain my creative energy remains to be seen.

Peace
Posted by alienbody at 10:25 AM