This here's MY town & A Cupcake

However, any foray ending with oneself scarfing down deliciousness (a.k.a. cupcakes) is NEVER a disappointment. Unless, of course, the cupcake is crap...which it wasn't. YAY!

San Jose is huge, as is evident by its placement as the 10th largest city in the U.S. of A. Close to one million people live here...often with all of them going exactly where I need to go...at the same time (stupid traffic). I'd post the actual population, but who cares...rounding up works.

San Jose has sprawled itself to cover 178(ish) square miles, taking up a whole lotta real estate - sort of like a teenager (or two) crashed on the couch watching TV.

My couch seats 8 people, or two teenagers - whichever gets there first.

The point of this post isn't to brag about my obnoxiously large couch or to relay snooze inducing facts about San Jose.

My point is more a declaration to myself that my town is worthy of exploration, beyond the normal haunts.

My goal is to have occasional adventures where I take pictures of the Good, The Bad, The Ugly - also the sublime, the lovely, the muck and whatever else in between that defies categorization.

I make no pretense of being a good photographer. I point and click with a good camera. I either occasionally get lucky or the camera takes pity on my ineptitude and captures a sweet shot.
I do hope to improve...for everyone's sake.

Today is a practice day.

It started with the goal of reaching Loves Cupcakes, which was a success for all involved. 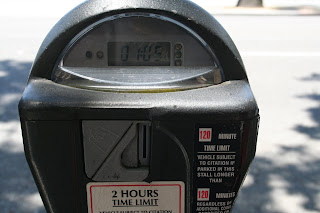 It is downtown...must pay our dues. We had an hour, we took MUCH less...the change I fed into this beast was paying it forward to the next city dweller to park in this spot.
YOU'RE WELCOME 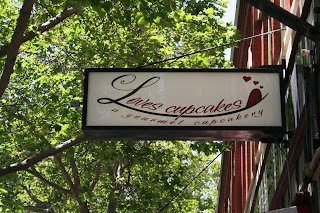 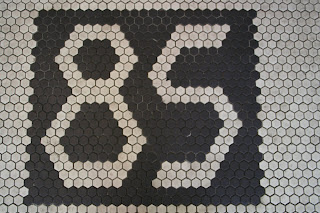 In case you are interested in where "HEEERRREEE!" is, it is 85 San Fernando St - between 2nd & 3rd. I think every store front should have a mosaic tile floor - put art back into the ordinary every day, would ya please! 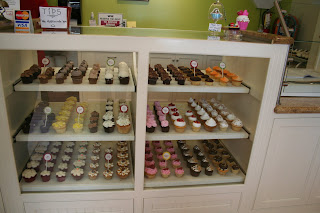 The picture is crooked because the building is old. Ya...that's right. And...and...Kat took the picture. And...and...um...ok, really...I was giddy with the choices and a little wobbly from anticipation, so shoot me. 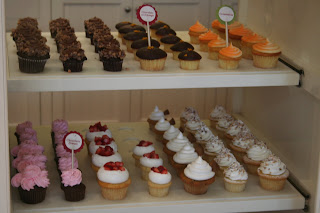 I need to figure out how to make these pictures bigger. I swear I clicked the "LARGE" button before uploading these. OH well...you get the idea. 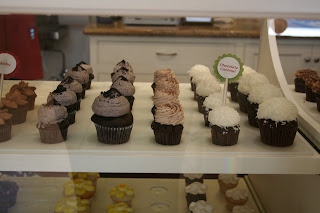 When I asked if I could take pictures of the case, the guy behind the counter happily agreed and asked if I wanted him in the picture as well. I guess some people are into that sort of thing...pairing people WITH the food. Pfft...whatever floats your boat folks...

But we were there for the cupcakes.

I politely declined. Nicely even....no snarkyness at all!!

With cupcakes in hand (or in box actually), Kat and I scouted out a place to eat them and found this.... 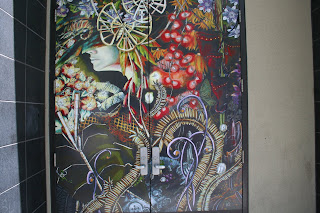 Listen up building owners of San Jose - do this to all of your service doors and bays. Bring color to your world and mine. Give an artist a canvas and let them inspire in passersby their own interpretation. 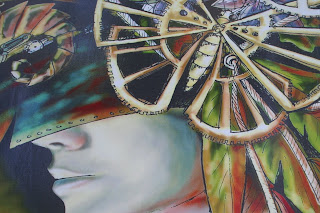 We found a table nearby and sat to enjoy the cupcakes. At least Kat did, my olfactory senses were a bit overwhelmed with the smell that often lingers where transient folks have spent a good deal of time. I decided to wait to eat my cupcake when I got home - for what I spent on that cupcake I was going to enjoy it with ALL my sense, thank -ya-verra-much.


Now for a bit o' silly: Kat making herself at home 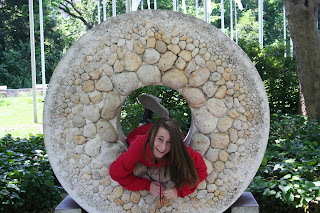 And some somber: Veterans Memorial 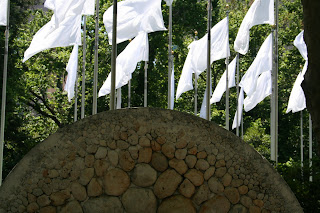 And --- a glimps of why I need to return to downtown with my BIG lens: 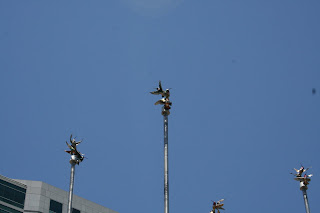 The pole toppers are painted birds. I've wanted to get a close up of them for a few years - I'll get you yet, my pretties.

So concludes my 5 minute tour of San Jose. I will never uncover all that this city has to offer - at least as I see it through my eyes (scary thought).

So..what do you think? Should I continue with the occasional "This here's MY town..." series?

I guess it can't hurt, since my blog has no specific focus anyway.

As always...thanks for stopping by!
Peace & Cupcake Wishes to you all!
Posted by alienbody at 1:56 PM