This past weekend I went somewhere and did stuff.

Specificially, to San Diego, where I walked (what felt like) eleventy-bazillion miles.

Not only that, but the 100+ year old structure that housed our condo had stairs.
There were 5 floors.
Guess which level OUR condo was on...go on, guess....yup...numero cinco.

We climbed those stairs a GAzillion times. Or, maybe a dozen...either/or.

Yes, it had an elevator too, but when faced with a chance to work off even the teensiest bit of what we had eaten...I was going to take it.

It was a great trip, filled with fabulous company (my husband and my aunt), great day-trips and far out food. While hubby was kickin' it at a homebrewers confrerence, my aunt and I hoofed it around downtown.

I am not a lover of 'downtown life'. When I started day dreaming about San Diego, this isn't the view I had in mind: 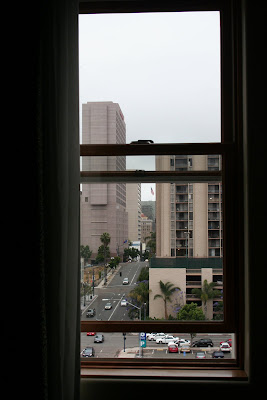 The view from our living room was of this treacherous intersection that had a serious looking red-light camera. Anyone playing chicken with the signal was caught by the flash of this camera that, I fully believe, was capable of capturing the color of your eyes and...perhaps...whatever you were thinking at the moment, it was THAT probing. The light lit up our little room like a flare.

While the condo was nice, I am NOT a city girl at heart. Plant me in a small(ish) town by the ocean or the mountains near a large body of water. I'll be most happy there.

That isn't to say that I don't appreciate big city life. It is thoroughly awesome...in small doses, which is what I got. There is something to be said for a city like San Diego that lets you practically walk everywhere you want to go. The trolly was there as well, but the blocks are small and...well...there was all the food...and, maybe, a few cocktails.

Once my aunt arrived we quickly *drove* over to Hash House A G0 Go. If you are in Downtown SD, go here....lickety split like. Their catch phrase, "Twisted Farm Food", says it all. 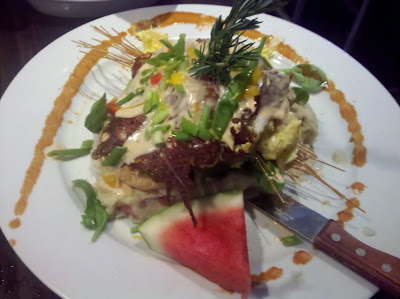 I took this grainy picture with my cell phone, which does not do the enormity of this dish justice. I thought placing the knife in the photo would work, but since it could double as a machete, it isn't exactly good perspective. Just imagine that this plate took up a considerable amount of real estate on a two seater table. Yeah...it was that big. The 20 oz. Bloody Mary wouldn't fit into the frame either. This dish was shared and we still had food left over. If you want to learn more about Hash House A Go Go, please clickly the linky...and then hold on to your heart, cause it will start cloggin!

After our meal we parked the car at the condo and caught the trolly to the waterfront and Seaport Village. It was a fun, bustling touristy place that allowed me to capture a few images that brought me joy. 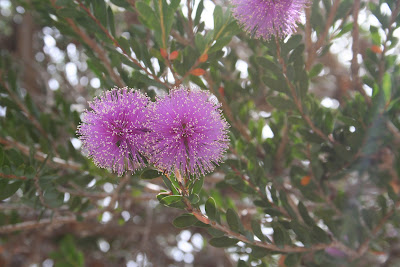 This was a small tree, which is probably really a bush, but it was full of these pompom-like flowers. My poor camera skills didn't capture the real beauty of it, but still...they are so cute! 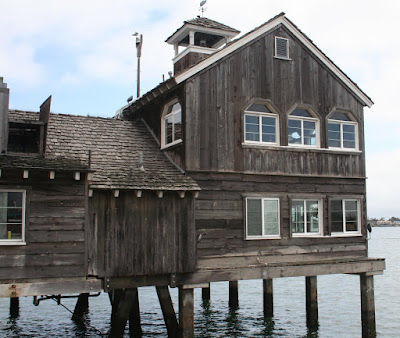 I never investigated what this structure was, I was too interested in making up a fantasy in my head about sitting in a cozy chair by one of the upstairs windows while gazing out at a stormy sea as the briney water sprays across the glass. I didn't care what sort of business occupied the building, it was just beautiful to me.

Walking along the oceanfront we met this adorable beastie... 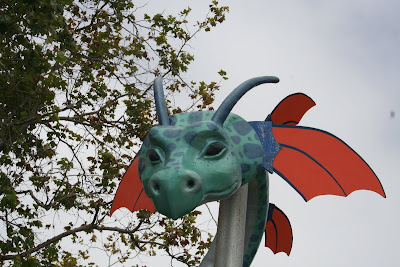 The plaque said "Sea Dragon", which coincidentally is my absolute FAVORITE sea critter. Of course, the real sea dragon looks nothing like this fella, but ya'll know me by now and I'm pretty sure you can guess that inside my head I was jumping up and down shouting, "I WANT ONE, I WANT ONE." It was too large for me to dig out of the ground, shove in my purse and walk inconspicuously away...so I left it there for some other child to admire. Sigh...

We walked past the enormous ship, Midway. There are plenty of wonderful photos on the internet you can look up, mine were not worthy of posting. It is an impressive ship, awe inspiring actually...to think of the people who served aboard her. Wow...

Sharing space with the Midway are these two love birds: 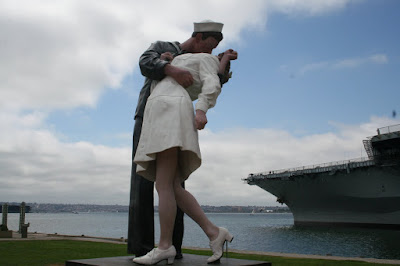 Get a room, would ya! Hehehe...this statue is HUGE and so much fun! I don't think any man can resist having his picture taken at her heel while gazing up. Yup...not one guy passing by or posing could resist. For perspective, a tall man could rest lean against her leg and rest his palm on her calf. It's very tall!

The other work of art was far more profound and made me tear up while I circled it. I feel these three pictures capture the most important 'sides' of this piece called Homecoming: 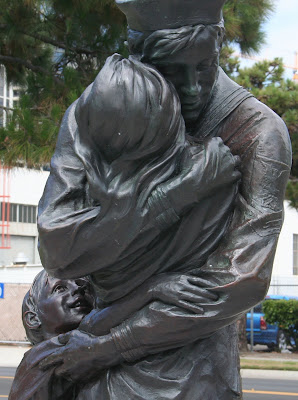 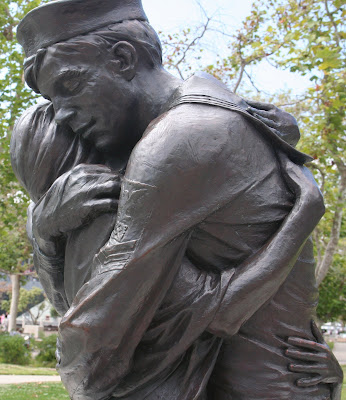 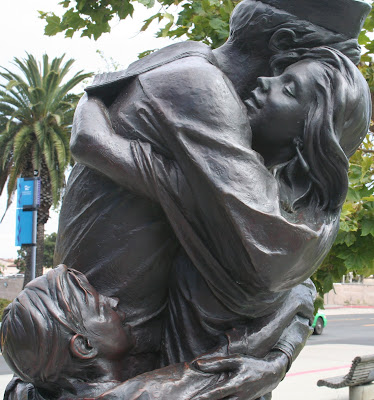 The artist did a fine job of conveying meaning without words, so there is nothing that I need add.

So concludes Day 1 of my trip.
There are more pictures, but these few are my favorites (from this day).
Day 2 will be LOADED with pix, because it was spent in Balboa Park.
You HAVE to go there.
Like, start packing up the car and hitting the road GO-THERE-NOW kind of place.
It was so lovely and such a wonderful break from the concrete and sky high structures of downtown...and it was literally a mile from our condo.
I love huge expanses of land in crowded cities.

I'll probably start working on Day 2 now, but will post it tomorrow.
I don't want to push too much awesomeness on you at once.