Last night, in the aftermath of Thanksgiving gorging, having a full tank of gas would not have done me a lot of good.

Because, if Zombies had chosen last night to rise up, go forth and infest the planet - our human Food Coma Thursday would have been a smorgasbord for them.  I, for one, should have hired a winch crew to lift me off the couch.

While I did go for a little after stroll with Hubbypants after stooofing my face, the festivities wrapped up early and we nestled into our couch to wait for the zombies to come put an end to our misery.

But while we waited, we watched: 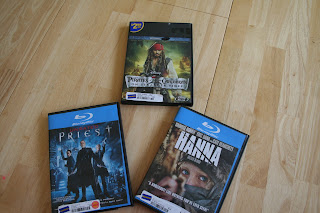 We started with Priest, which made me hope for a vampire invasion over zombies, because vamps just git'r done, but zombies....oy...the chewing and the chewing and the chewing.  They just eat so slow! I'd like it to be over quickly and I DON'T want to be turned in to either, because it appears that both zombies and vamps lose their taste for pumpkin pie and whipped cream and *gasp* coffee. For reals, there is a fate worse than being the living dead and it is living dead without coffee and pie.

Pirates: On Stranger Tides was alright. It was piratey and giggly, as usual. With a brain muddled from food and wine, I wasn't going for Oscar material - just entertainment.

Hanna was artsy and weird, and since I love weird, I liked this movie. It could have been a better movie, in fact the director should give me a buzz when ready to do a sequel, because I've got LOTS of advice  - I'm literally full of it!


And now, Food Coma Thursday is followed by: 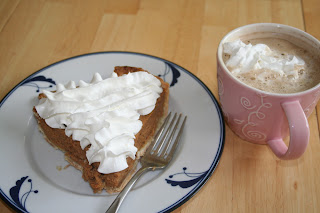 Leftover Friday!
(yes, that IS angels you hear singing)

And if you think that the piece of pumpkin pie canoodling with the whipped cream looks rather large, well then...it isn't an optical allusion and your vision is just fine. Yay you! I'm going to make you the look-out for approaching zombies with those mad observational skillz of yours!

Whipped cream in my coffee? Yes.

Five mile walk to counter all of it, probably...must finish mountain of pie first.

But right now I must venture out into the World Wide Interwebz to visit my favorite blogs and catch up on my email all while ignoring the text from my daughter to pick her up from a sleepover and take her AND her friends to the mall.