Mish-moshy-ness, Vampire Karaoke and a tale.

There is so much going on in my brain right now that all my thoughts are going all ninja on each other and fighting over who gets to go first! 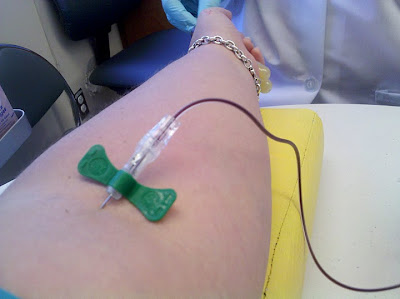 (Disclaimer: picture from a PREVIOUS visit to the blood suckers. I didn't get one from today - when they tried to kill me)

Kaiser took my blood today - buckets of it.

O.k. so they weren't ginormous...but still...as I'm sitting there slowly being bled to death I started to think about a few things:

2. We put men on the moon, why the hell do I have still have to pee into a cup...that I HAVE TO HOLD? Answer me that, Kaiser!!

3. I'm never asking for directions in the hospital again, becuase I always get the kindly, but SLOW, elderly volunteer that insists on showing me to my destination. That wouldn't be so bad if I didn't need to get there TODAY! (This is by no means slamming old people, I'm rapidly becoming one of them. But really...give them motorized scooters for heavens sake!).

3. I bet people would be far more agreeable to having their life force drained from their bodies if it were being done by smokin' hot vampires.

The phlebotomist was a little skeptical when I suggested it, no doubt wondering how many more hours of training it would take for him to go get his Vampire certification. Also, probably, weighing the pros & cons of only being able to work at night.

My mind wandered back to the oodles of vials of blood they took and I wondered if they were already vampires and were stocking up for the end of the world in 2012 (or the rapture...or whatever it is) when there wouldn't be any more humans to feed upon. Dude...wouldn't that be creepy???

Today was also the first time, after a bazillion needle pokes, that the needle poking guy fucked up and left me with a big hard lumpy bruise...that hurts. :-(

I'm going to submit a story to a writing contest.

There will be front line judges giving the ax to some stories and passing along others to the guest judge.

I refuse to read the bio on any of them.

I'm writing my story with complete disregard for the judges.

Cause I'm a rebel that way.

Not really - reading the bio's will convince me that I shouldn't enter...and then I won't.

So by remaining blissfully unaware (a perpetual state of being for moi, it seems) I can write all the goofy-gibberishness I want and the worse they can do is say no.

That wouldn't hurt my feelings.

Or, I guess, they could tell me that it was so horrible they shredded it, set fire to it and offered up the ashes to the nearest volcano...which immediately imploded.

That would sort of hurt my feelings.

I'm now sitting here waiting for all the blood test results to trickle in and tell me there is nothing wrong with me - that I'm just getting old.

I'd like to nap, because I'm all sleepy from lack of blood, but can't sleep 'cause my arm hurts (whine).

Have a great day...and watch out for vampires.

p.s. I have NO bloody idea where the title came from - it's the lack of blood in my body messin' with my brain...I'm sure of it.