There are a multitude of things I want to say, perhaps in this very blog.

I've been obsessing over the trip odometer in my car for the past several weeks.

On June 14th, I re-set the odometer to track my trip to San Diego.

I'm weird that way - my love of watching miles tick away, reading the map as I fly through town after town, anticipating what comes next. Well, while Hubbypants drives of course...I don't do that sort of thing while I'm driving - nope, not me...never, ever ever...I watch the road like a hawk, I do.

After that trip, with other trips looming, I decided to leave the odometer alone and see what sort of asphalt homage I was paying to the Road Trip Gods.

Well, it turns out to be A LOT apparently.

I have logged damn near 6K miles on my car in 7 weeks.

That is *almost* like driving cross country and back.

But nope, all of it was done in two states.

I didn't do all the driving, but I did a great deal of it. The numbers I racked up were not just the long trips, they include countless mini-trips to visit the 'rents, both of whom have been in the hospital about an hour away from my home.

I wrote this number down as I hauled my hiney out of the drivers seat after returning from the Arizona road trip just last night.

Did I mention that already?

Well, it's my blog so I'll say it twice and I'll probably say it again later...'cause I can.

The road trip came on the heels of stressful couple of weeks.

I'm not going to go into details, I'll save it for another blog - and when my brain isn't so fuzzy.

So for now, a few pictures. 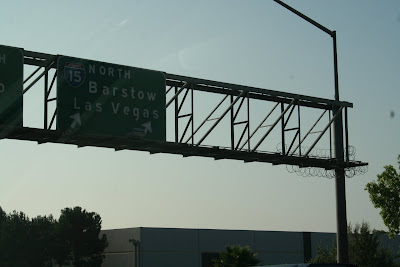 For starters, we were NOT going to Las Vegas (bummer). Although we were tempted. Cocktails, glitz and people watching in Las Vegas or Wedding in Phoenix. Boy was it a tough choice, but being the fabulous friend that I am we decided on the Wedding (you're welcome, Liz). But, it was close. Next time,Vegas. 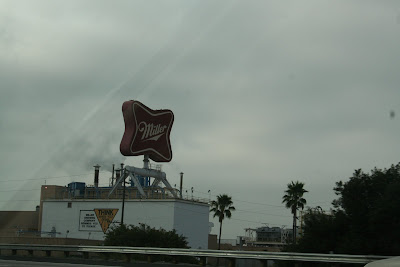 I do not drink their beer, but I liked the sign. It reminded me of bygone days. Dunno why. 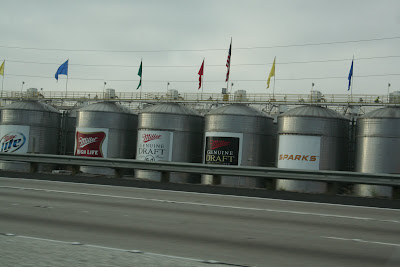 And the tanks sitting right next to the freeway. It was far more impressive in person. 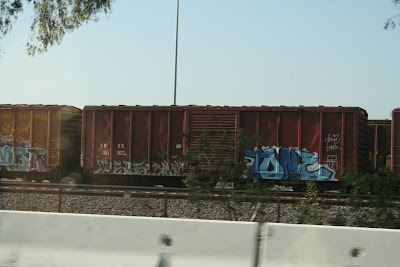 Tagger Art. Every car had something. Rather cool and lovely, in a hoodlum sort of way. ;-) 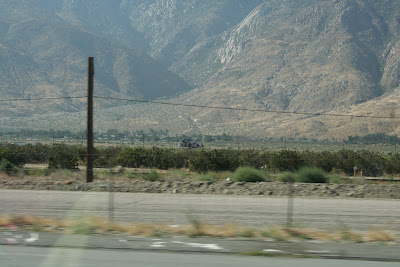 There is nothing like a drive through the desert to spark the imagination. For example: 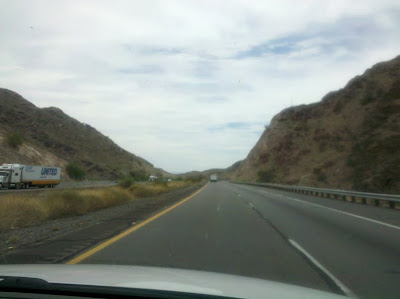 We have the alien peering down on us from the sky. See the giant eye (upper right), the nose & mouth? It looks rather annoyed to me. It would have been so cool if a lightening storm started up and shot bolts out of that ginormous eye! 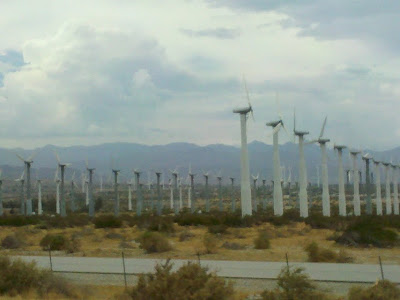 And then there is the wind turbines, all lined up as if they are going into battle. A giant army of whirling blades. 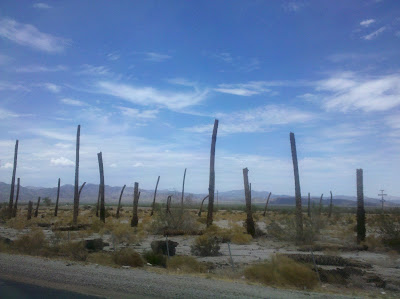 Then, we drive by this. A grove of decapitated palm trees. Creepy. 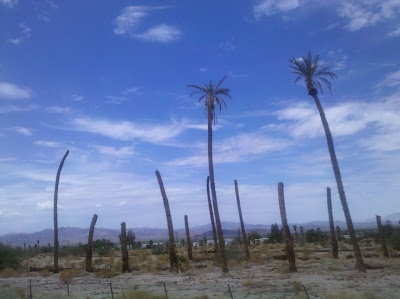 Oh, oh, OH....what if that sky alien shot lightning beams out of that giant eye causing the ginormous wind turbines to come to life, which then went on a rampage decapitating the palms...all but the two that ducked just in the nick of time. How cool would that have been to watch?

Why are you looking at me that way?

I took lots more pictures that turned out terrible, so they won't be posing here.

Welp, there is lots to do today and a few trips to visit the 'rents this week, so I'd best get started on my Must Get r' Done list.

Peace!
Posted by alienbody at 7:20 AM